Skip to end of metadata Go to start of metadata
1.21.0-beta1 contains several new features that require customer feedback. These features are outlined in 1.21 and explained in more detail below.

The process of exporting and importing data into a CAST Imaging instance has previously been a manual process that must be actioned following the completion of either a snapshot or an analysis. AIP Console 1.21.0-beta1 introduces the ability to automate this data export and import as part of the standard onboarding and rescan processes so that when these processes are complete, all data is ready to use in CAST Imaging without having to perform any additional manual actions.

Configuring AIP Console to interface with your CAST Imaging instance 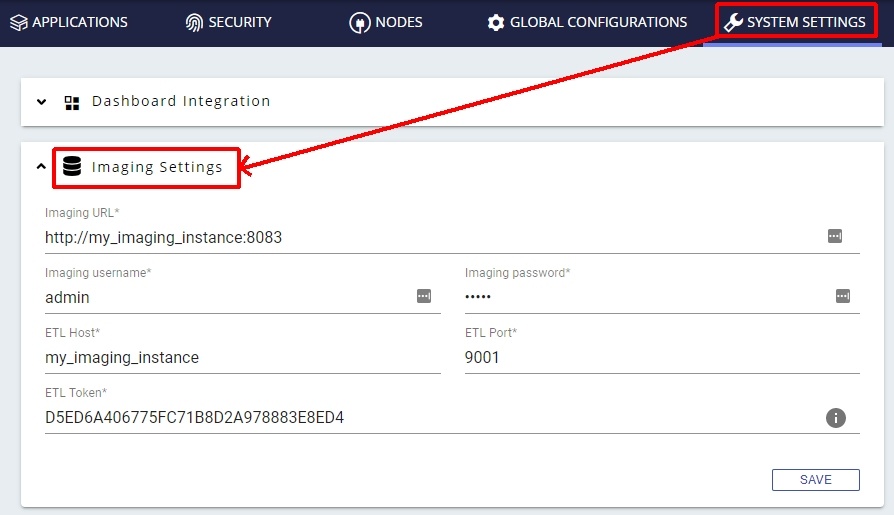 When the settings are saved:

When you have entered settings you can edit them but you cannot remove them.

Ensuring AIP Console uploads data during the next analysis/snapshot

To ensure that your data is uploaded to your CAST Imaging instance, tick the Publish to CAST Imaging option when adding a new version, or running a new snapshot/analysis: 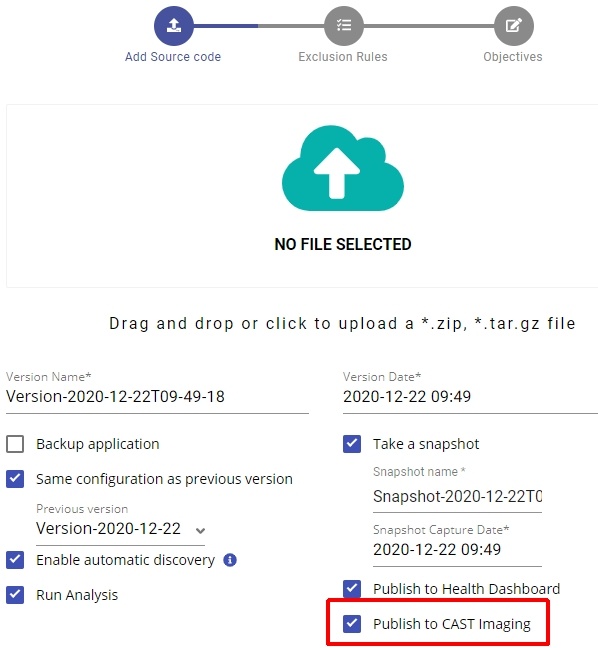 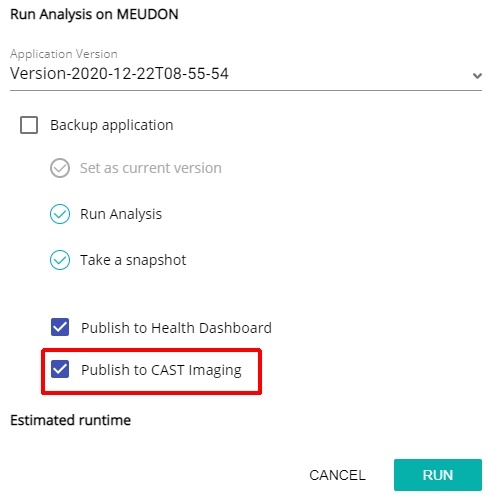 What happens when the Application data already exists in CAST Imaging?

When the current application already exists in your designated CAST Imaging instance, whether from a manual export/import, or from a previous automated upload from AIP Console, when you choose data to be uploaded again in a new snapshot/analysis (known as a refresh) the application data will be merged with existing data already imported into CAST Imaging - so new objects may be visible and existing objects may be removed or updated.

What happens if you delete an Application or a snapshot?

If you delete an Application or a snapshot using AIP Console, no corresponding data will be removed from your designated CAST Imaging instance. If you need to remove the data from CAST Imaging, please see Admin Center - Application management panel.

Where is the exported data stored?

When the Publish to CAST Imaging option is ticked, the data export/import process will be performed during the analysis/snapshot as explained previously. This process generates a ZIP file containing the data exported from the Analysis schema for your Application and this ZIP file is stored in the following location on the relevant AIP Node (i.e. the AIP Node that is responsible for the analysis/snapshot process for your Application):

This ZIP file can be retained and manually imported into CAST Imaging if required. Alongside the ZIP file, the config.json file used to perform the export/import process is also retained:

Additional options when adding/cloning/editing a version

Two new options have been added to improve workflow flexibility when adding/cloning/editing a version: 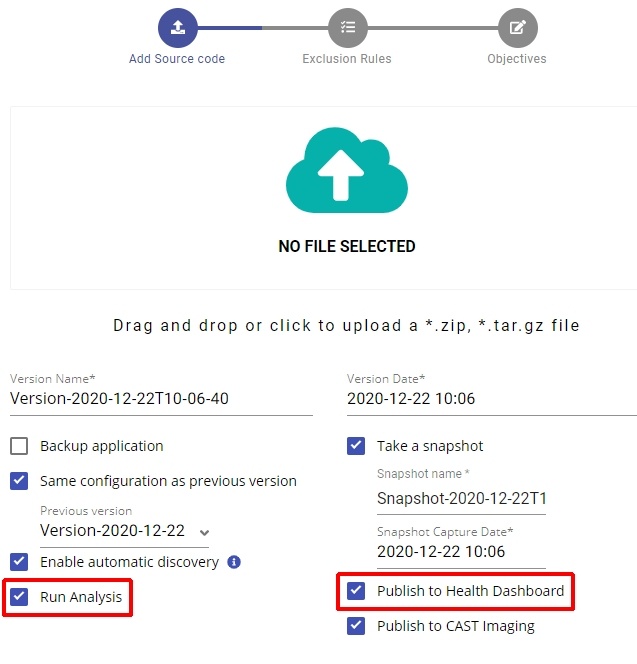 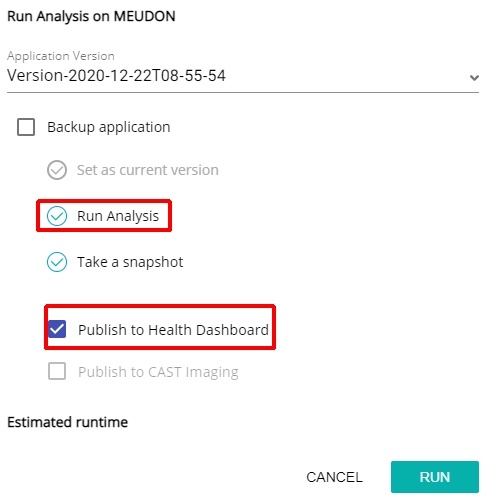 The Run Analysis option has been added to provide more flexibility when adding/cloning/editing a version:

Previously the Run analysis option (available only when choosing to run an analysis/take a new snapshot, whether for a new application/version in Advanced onboarding mode or an existing application with a new version in Advanced rescan mode) did not include this step, therefore a full snapshot was required to be generated in order to correctly validate dynamic links or view Architecture Models results.

The Publish to Health Dashboard option has been added to allow a choice to be made when adding/cloning/editing a version:

This option requires that a snapshot is also generated.

AIP Console obtains details about which extensions to use from several different sources - these are known as the extension "origin":

When an extension has multiple "origins", AIP Console uses a priority system to determine which "origin" should be used to include the extension in a given Application version. Up until this release of AIP Console, the priority used was as follows:

Software architecture is becoming more and more complex and can involve various components and patterns. The library provides a means to store frequently used Layers and Sets than can be inserted (with their definition) into Architecture Models/Quality Models or Templates, so that you do not need to define the same Sets and Layers again and again. Take the following example:

Thus, like Architecture/Quality Templates, they can facilitate the creation of Architecture Models/Quality Models:

You can manage library components using the following menu: