If your application contains source code written using UNIX Shells and you want to view these object types and their links with other objects, then you should install this extension.

This version of the extension provides partial support for:

The extension will be automatically downloaded and installed in AIP Console when you deliver Shell code (i.e. any file with an extension listed below). You can also manually install the extension using the Application - Extensions interface.

Prepare and deliver the source code

Only files with following extensions will be analyzed:

If any files intended for other applications are included in the delivery and which are renamed to supported Shell extensions, the following effects might be observed during an analysis:

Shell source code needs to be preprocessed so that CAST can understand it and analyze it correctly. This code preprocessing is actioned automatically when an analysis is launched or a snapshot is generated (the code is preprocessed before the analysis starts). The Shell Preprocessor log file is stored in the following location:

Note that the LISA folder will be used to analyze the preprocessed files.

There are no analysis/technology configuration options available for Shell, however you should check that at least one Shell analysis unit has been created as shown below.

AIP Console exposes the technology configuration options once a version has been accepted/imported, or an analysis has been run. Click Universal Technology (3) in the Config (1) > Analysis (2) tab to display the available options for your Shell source code: 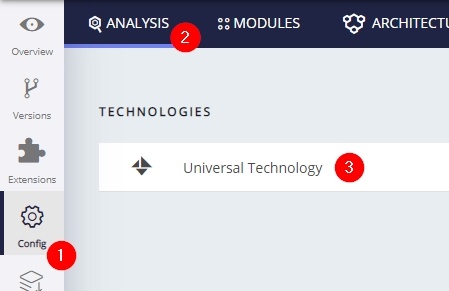 Then choose the relevant Analysis Unit (1) to view the configuration: 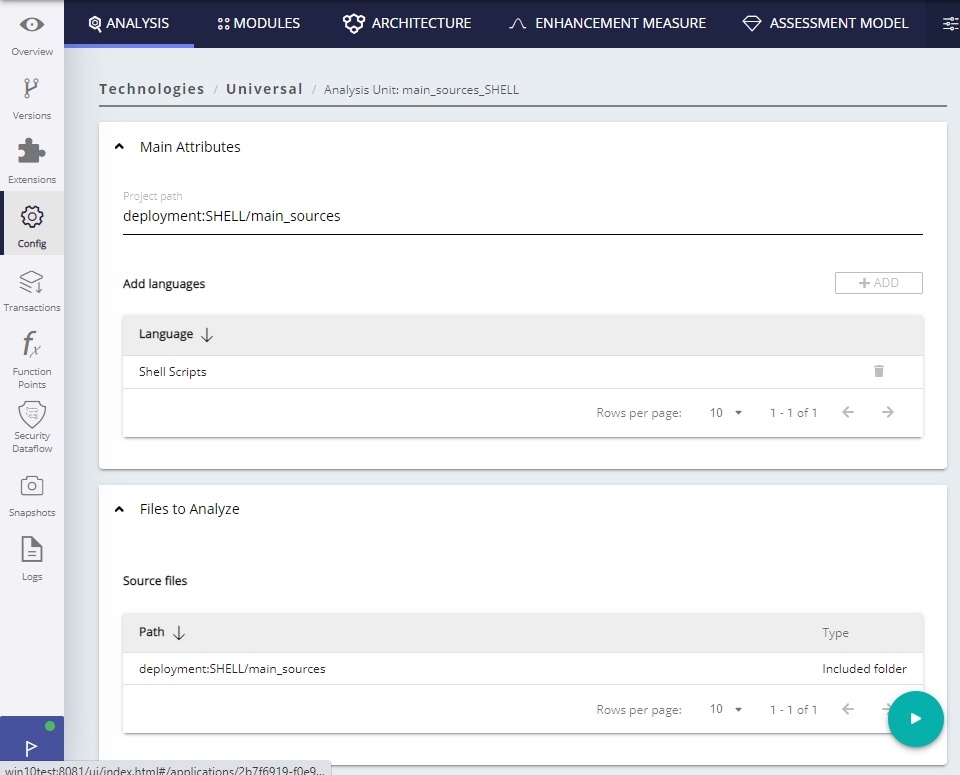 Analysis logs are stored in the default locations.

Shell Preprocessor log files (the preprocessor is launched automatically during an analysis) are stored in the following locations:

Shell allows the use of here-document to write SQL queries, for example:

The Shell extension can use these queries to create links.

The following call pattern are supported

The extension does support links between Shell programs and Java objects (for example methods). Links will be created between these technologies.

The extension manages call to Java classes and .jar files. For .jar files no links will go further as .jar aren't handle by any extensions, the link is purely informative.

The extension does support links between Shell programs and COBOL objects (for example programs). Links will be created between these technologies.

The extension does support links between Shell programs and Python objects (for example methods). Links will be created between these technologies.

will generate the following diagram, assuming that foo.py exists and has been analyzed

An example of a command invoking a lambda named my-function.

When analyzing it, a SHELL Call to AWS Lambda function object is created. This object will be linked to lambda functions objects (which may be created by other extensions) having the same name during application level analysis stage by the web services linker extension. When the name of an invoked Lamba function is not evaluated (either because of the absence of information or technical limitations) a SHELL Call to Unknown AWS Lambda Function is created instead. A maximum of one call for each lambda (including unknowns) is created per caller.

An example of a command creating an AWS Lambda of name my-function where the handler is a javascript method.

When analyzing it, a SHELL AWS Lambda Function object is created. It contains the runtime and handler properties (here nodejs12.x and index.handler, respectively). The linking from the lambda function to the handler function is then carried out during application level analysis stage by one of the following extensions (depending on the runtime):

Below we illustrate the expected results with a few aws commands. The code samples used are adaptations from available examples in official AWS documentation pages.

The Lambda function object contains the runtime and handler properties (see details above in the section) necessary for linking to the respective handler in different technologies.

There are at least two different APIs for manipulation of S3 buckets. The s3api command is used for low level manipulation where s3 has a higher-level functionality.

In the absence of explicit bucket creation, references to buckets in other commands are used to create table objects.

For the list of commands acting on a bucket that are modelized with a callLink, expand the list below

In the following code we show a few calls to s3 and s3api commands.

The resulting buckets and links:

In the following code we send a message with the Send function and we retrieve the message in the Receive function:

The results in Enlighten show the created objects with name equal to the Queue url:

The callLink links between the Publisher and the respective Receivers are created by the Web Services Linker extension during application level based on the Queue name registered in the queueName property. The handler of the receiver is the function Receive itself, responsible of treating the received data.

The supported protocols are the following:

The callLink links between the Publisher and the respective Subscribers are created by the Web Services Linker extension during application level.

For each method a maximum of one subscriber per given topic will be created as shown in the image above.

In the following code we have to functions, one publishing into a topic, and the other one subscribing to different notification endpoints of different protocols.

The callLink links between the Publisher and the respective Subscribers are created by the Web Services Linker extension during application level.

For each method a maximum of one subscriber per given topic will be created as shown in the image above.

We can also have direct sms deliveries from calls to publish API command:

resulting in the direct callLink to the SHELL SMS object:

You can also find a global list here: https://technologies.castsoftware.com/rules?sec=t_1016000&ref=||.

Searches not limited only to embedded SQL

The MA (Metric Assistant) which is used for metric search cannot search only in embedded SQL. Some Shell rules may be affected by this limitation and may produce false violations.

The MA (Metric Assistant) which is used for metric search cannot search correctly while excluding comments especially if comments start or end adjacent to the keyword. If such a condition exists, random false violations may occur.

Shell code allows string to be embedded in strings as shown in the code sample below. Currently, the Shell extension (and other Universal Analyzer type extensions) will consider this as one continuous string. Because we do not have any way to identify perfect end string patterns in this case, we cannot find the end of string and therefore the file will be skipped during the analysis.

When a document marker is in a multi-line string, the Shell extension will not be able detect that it is in a string, for example:

In both of these cases, the file will be skipped and logs will contain the warning: "File Skipped".