Skip to end of metadata Go to start of metadata
Summary: This page provides information that should help you to qualify the SAP ABAP application you need to analyze.

What you need to know

There are two types of ABAP code: "Procedural ABAP" and "ABAP Object". A significant part of the development of custom code around SAP is done using Procedural ABAP. However, in the last version of SAP specific standard modules are implemented in ABAP Objects and as a result, the custom code has been adapted to ABAP Objects.

The code developed within the SAP instance is extracted from the SAP repository, by using an ABAP program (known as extraction tools) delivered with CAST AIP, in order to be analyzed. The extractor will handle: 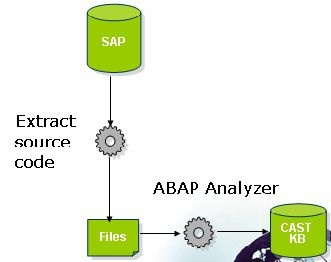 Objects analyzed by the ABAP Analyzer

The ABAP Analyzer supports Web Dynpro for ABAP only.

In addition, the ABAP Analyzer creates the following objects when the objects referenced in the code are not present:

The ABAP Analyzer provides the ability to see the objects around two programming models:

The ABAP Analyzer detects the technical structure regarding:

The following "Belongs To" relationships are managed by the ABAP Analyzer (object types located in the second level belong to those which are located in the first level):

In addition to the dependency analysis, a comprehensive set of metrics is calculated on the ABAP code, such as:

Quality rules are calculated on ABAP code (this includes Web Dynpro object types such as Method, Event Handlers and Supply functions) and on Open SQL queries.

Questions to ask the customer

The following list provides some questions that should be discussed with the customer before extracting any source code from the SAP repository:

The ABAP code is extracted from the SAP repository via the an ABAP program (extractor) as mentioned before. The ABAP program queries the system catalog of the SAP repository and use built-in functions to access the source code and then save it as text files on disk. The results are saved in a special file format on a network, a local hard drive or on the SAP server home directory. The result files are then specified in the configuration of the ABAP analysis settings.

The extractor allows you to extract the number of rows for each extracted table. It saves this information in a XML format in file: SAP_tables_volume_0001.SQLTABLESIZE among those that are already generated. This file must be used to configure XXL diagnostics in the CAST Management Studio.

So, if you want to use these specific diagnostics, then you must select the option Extract number of rows in the SAP Extractor (this is the default value for this option). In addition, the extractor extracts the number of rows for client-dependent tables. Client-dependent tables can contain merged data related to different clients. By default, this option is activated. You must know that this operation can take a long time especially if the volumes of tables are huge.

In batch mode, the extractors cannot create subdirectories on the server. They will then use ZIP files to save source files and corresponding sub-directories related to packages. Note that this behavior is available for SAP 4.7, ECC5 and ECC6 only. For other versions, result files will be all saved in the same directory. This does not impact the analyzer (it finds information about package in source files) but if you change the extraction mode, then objects full name will change and this will impact dashboard in terms of deleted and new created objects.
See related documentation for more information on how to use this type of files.

It is likely that the ABAP source code will not be extracted from the CAST AIP analysis machine. Therefore the ABAP files will be moved to the CAST AIP analysis machine following extraction. The CAST AIP administrator should note the number of ABAP files present in each Package / folder that is a candidate for the analysis. A header is inserted at the beginning of the extracted files. This header contains specific information such as the version of the extractor, the version of SAP, the package and the extraction date.

It is important to use the files that are created by the CAST extractor because the ABAP Analyzer uses the information written in the ABAP file header.

The administrator will make sure that a backup of the current version of the ABAP source code is kept in a location clearly identified by the project team. This procedure will include a clear identification of the different versions and the date the files were extracted from the SAP repository.