Summary: background information about C and C++ compilation to help you qualify and configure the analysis.

Understanding how a C or C++ project is compiled and linked is the best way to configure analysis settings properly.

A C/C++ project is something that is used to generate one of these three artifacts:

The nature of the generated artifact does not matter much, but the notion of a project is nevertheless important, because it tells us what should be grouped into an Analysis Unit. A project is also useful to identify what the different options are that were used to compile the code and that are also required to analyze it correctly.

Unfortunately, there is not one standardized build system, or one project format for C++, but many different systems (autoconf, cmake, makefiles, vcxproj, xcodeproj…). And each of these systems is highly configurable, which make automatically retrieving information in those projects a very hard task. So, you have to understand better what a project does before you can configure an analysis.

The project build process is based on the following steps: 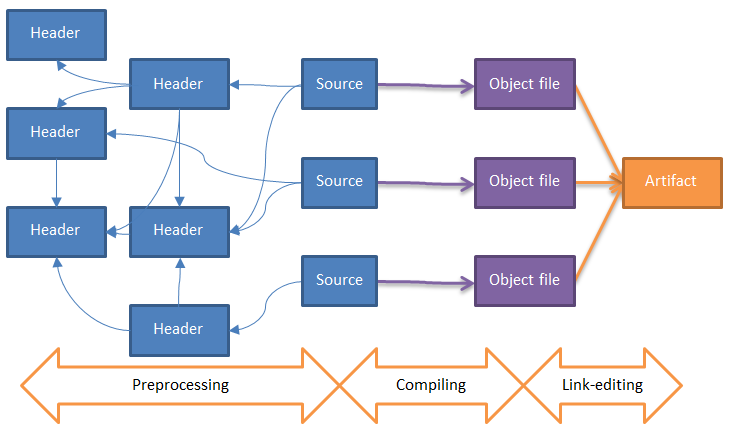 The critical step in a C/C++ source code analysis is the step related to the source code preprocessing. The reasons are as follows:

This step of the build process uses the content of the source files, but is also very dependent on various compiler options and system options. These must be set to the same value in source code analysis settings as they have during compilation. A small issue in option management can cascade and lead to a failure in header inclusion that will lead to missing macros which will cause the analyzer to have input code totally different from what it should have. We can try to be robust against small errors, but we can’t replace missing or corrupt data. This means that even if the analysis does not end in error, in case of a bad configuration, the results may be meaningless.

One of the basic rules of the C and C++ languages, is that you must first mention something before you can use it. For instance:

The following code corrects the issue:

If we just want to use a function defined in a third-party library, we still need to know about it:

.h files are not considered as "source code" files by CAST and as such are not automatically analyzed. If the location of the .h files is included in the relevant Analysis Unit (Include Path option) then any .h files that are referenced in application source code (.c/.cpp etc.) will be included in the analysis.

The following syntax is used in source code to textually include the content of a source file inside another source file:

When the user includes a file in another, he usually does not specify the full path of the included file, because he wants his projects to be movable to different folders. Instead, he specifies a relative path, but relative to what?

The complete rules are complex, and can vary between different compilers. But basically, each compiler has an ordered list of Include Paths that will be used as possible roots. If the code contains #include "a/b.h", and the include path lists contains c:\folder1 and c:\folder2, the compiler will first search for a file named c:\folder1\a\b.h, and if it does not find it, will search for c:\folder2\a\b.h.

The CAST AIP environment profiles for some well-known compilers already define some include paths that include the system headers provided with the compiler. However, this requires the corresponding compiler to be installed on the analysis machine. If your compiler is not listed, you may consider defining your own profile.

The best practice is to deliver the content of the include path at the same time as the rest of the analysis. Creating a self-consistent package ensures that your analysis will generate the same correct outputs on every computer.

C/C++ is a case sensitive language, therefore it is important to ensure that:

If your include statements use uppercase or a mixture of lower and uppercase, it is possible to manually create a macro in CAST Console to workaround this. For example if you are using #INCLUDE, you can create a macro as follows - this will force CAST to treat #INCLUDE as #include: 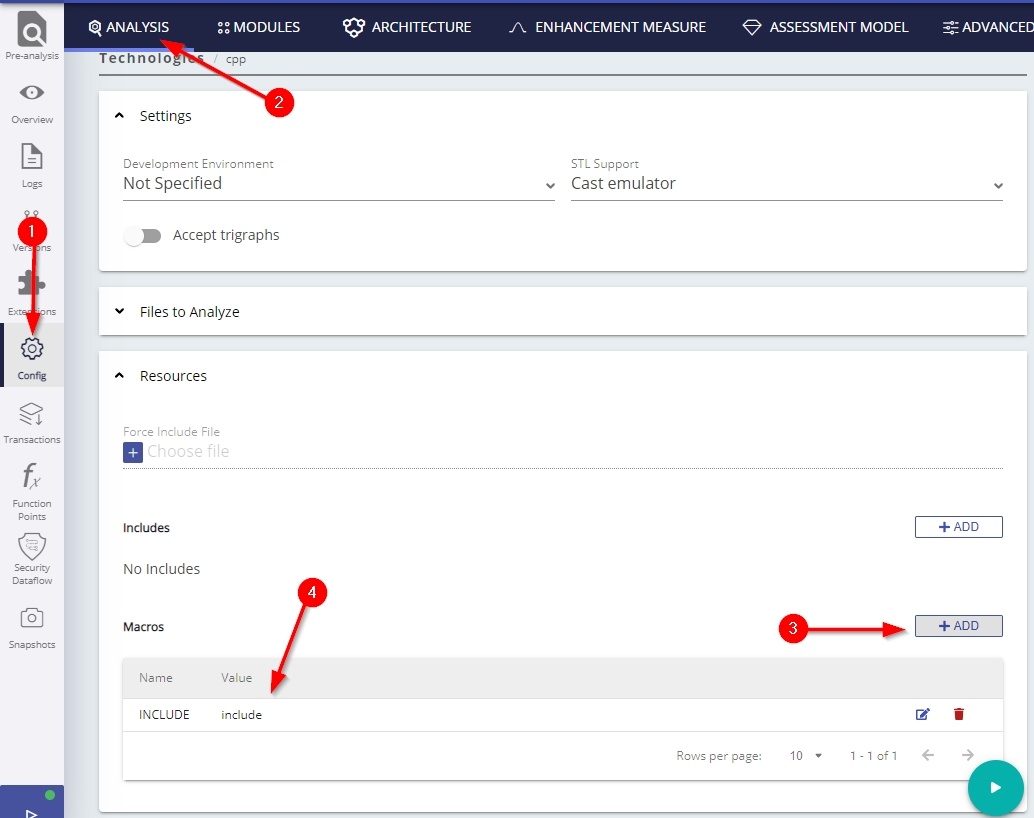 In addition to including header files, the preprocessor has another feature: It can define macros. Almost any word that you see in a C++ normal can be:

There is no way to know if a word denotes a macro or not, except reading all the code before the word is used (including the relevant headers) and searching for a #define that matches this word.

Macros can be used for many purposes in a C or C++ program. They can be used to define constants, or function-like structures, but they can also have an impact on what code will be compiled, and what code will be skipped. They are very often used to obtain a unique source code base that can adapt to several environments (different OS, different compilers, different versions of third party software etc.).

There are three ways to define macros:

When you define a macro, you give it a name, and a replacement string. The replacement string is optional and a macro can be empty. These empty macros are often used with #ifdef and #ifndef directives. These directives test if a macro has been defined, whatever its value.

Usually, in a real source code application, most of the macros will be defined in the source code, but how they are defined may depend on the value of a few configuration macros.

The analyzer needs, as configuration, the macros defined by the first two methods (but not by the third method, they are already provided by the source code). In the previous example, to select the right case, you need to decide whether the macro WINDOWS should be defined or not for your analysis, but the macro PAUSE should not be defined in the analysis options.

By identifying the assemblies and their properties and dependencies, you will obtain the organization of the source code, which you can use to organize the analysis units and the main input for their configuration. An assembly is a binary file that corresponds either to a library or to an executable. We don't analyze assemblies. In order to do a proper analysis, we need to know how the source code is organized into assemblies.

Based on the fact that the C / C++ Analyzer works like a compiler and a compiler treats one assembly at a time, you must keep in mind that:

You should ask the customer how assemblies are built (i.e. which source code to use, and their dependencies). In many cases, each assembly is built from files contained in dedicated folders. In situations where information regarding the build-process is missing, you can refer to the build files for guidance. C/C++ code is often built using a generic mechanism instrumented by such files: usually makefiles on UNIX systems and vcproj files on Windows. When applications are built using simple makefiles, it is generally possible to figure out how the system is compiled. When makefiles are too complex you should also ask for help from an expert in this field.

By identifying if and through which API the C/C++ code accesses databases, we can collect additional information that will be used to configure the analyzers and that will affect resolution of links to database artifacts.

For assemblies containing references to database artifacts, you need to primarily identify:

Note that some applications can use both embedded SQL and database APIs.

By determining the existence of dynamic code, you will determine whether you will need to create Reference Pattern jobs to add links and augment known dependencies between assemblies. Sometimes the C/C++ code dynamically loads libraries and gets pointers on functions from the library and then executes them. This type of situation requires additional settings, as we will see later.

To recognize dynamic code use, you need to search the source code for the system function calls that are used to load or find DLLs, and find functions in the DLLs:

Where the loaded code belongs to the code you are analyzing, you must consider that the loading assembly is dependent (see Assembly organization and sources above) on any assembly it may load.