The AWSJava extension is responsible of creating objects describing Amazon Web Service (AWS) lambda functions but only in the context of java technology. (Similarly the NodeJS extension is responsible of AWS lambda Functions created for the nodejs runtime). To run fully, this extension requires a Universal Analysis Unit with the HTML5 language switched on. This allows analyzing the .json or .yml configuration files (which are used by deployment frameworks to build aws applications). The supported deployment frameworks are Serverless Framework, CloudFormation, and Serverless Application Model (SAM).

The complementary analysis responsible of creating Java Call to AWS Lambda Function objects is based on the analysis of java files and it will be launched without any further requirement upon installation of the com.castsoftware.awsjava plugin.

Below a typical serverless configuration file serverless.yml is presented (any name is supported, with both 'yml' and 'yaml' extensions, but the latter extension might require to be added explicitly in the Analysis Unit configuration in CAST-MS).

The com.castsoftware.awsjava will analyze the .yml file and it will create a JAVA AWS Lambda Function object only for the meanweather lambda function, because of the runtime java8.

The links between the Java AWS Lambda Function object and the actual java method (if present and resolved) will be done at application-level and indicated with a line in the log similar to:

As an example, we can analyze one of the samples provided by Amazon lambda-java8-dynamodb.

The events field in the serverless file links a URL to a given Lambda function. This alternative entry point for triggering the lambda method is represented by a Java AWS Lambda GET Operation object. From extension version 1.1 this operation object is linked directly to the Java handler method (containing the call-back code to be executed after invocation of the Lambda function):

The results of the analysis as shown in Enlighten: 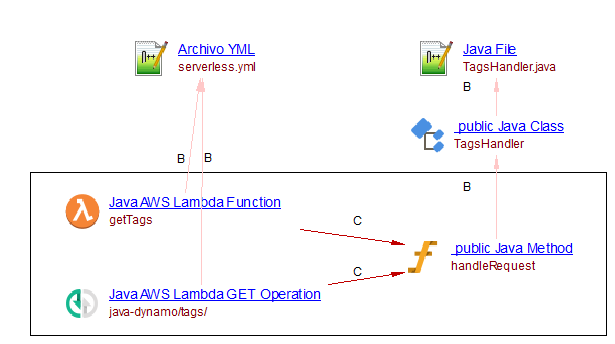 Similar results are expected for the predefined interface com.amazonaws.services.lambda.runtime.RequestStreamHandler.

The analyzer will create objects in the same line as those above described for the serverless framework. The same restriction applies: only those Lambda Functions using a Java Runtime (e.g. java8) and their possibly defined Lambda Operations are created by this extension.

In the (simplified) example below, we would have a Java AWS Lambda Function and a Java AWS Lambda GET Operation created, the latter with the URL name "/mypath/{}" (the special notation "+" added to the parameter is substituted by an empty bracket).

The connection between the Lambda object (and eventually its handler Java Method) and the Operation is done via analysis of the "x-amazon-apigateway-integration" element. The functions supported for string manipulation are "Fn::Join" and "Fn::GetAtt".

The lambda can be triggered by several kinds of events. The following event types are supported.

The analyzer creates a Java AWS Simple Queue Service Receiver object linked to the handler of the lambda:

The com.castsoftware.wbslinker would then link any SQS Publisher object (created by any extension) with the same queue name to that AWS Simple Queue Service Receiver object.

The analyzer will create a call link to the lambda from all callables linked to Bucket1 through a useInsert link.

The following table tells which link type will match which event type.

The following two annotations (equally named) are supported (one for Android and the other one for Java applications):

The example below reproduced from the official documentation https://docs.aws.amazon.com/lambda/latest/dg/with-android-example.html, illustrates how one can define (but not implemented) the lambda function by annotating the AndroidBackendLambdaFunction method.

The @LambdaFunction annotation maps the specific client method to the same-name Lambda function. The expected behavior of the JEE analyzer is to resolve the actual Lambda Function invocation via method calls (elsewhere) to the annotated interface methods. The com.castsoftware.awsjava extension on the other hand will create a Java Call to AWS Lambda Function object and the respective incoming callLink from the annotated interface method AndroidBackendLambdaFunction.