What is the CAST Database Extractor?

In order to analyze SQL databases (Microsoft, Oracle and Sybase) that are part of an Application, AIP Console requires that the databases are delivered for analysis in "offline" file format. In other words, AIP Console does not connect to the database during the analysis and instead the "offline" files are analyzed. This delivery/analysis method provides a distinct performance boost and allows the delivery to be performed by a dedicated DBA.

The "offline" files are generated by the CAST Database Extractor tool  - this tool will access the live RDBMS and extract and transform the required databases into file format - and it is these files that are fed into AIP Console.

How does the standalone database extractor work?

The standalone database extractor is a Java based tool which does not require installation. You can run it in GUI mode or via batch scripts in CLI mode. You can specify:

Once the database extractor has successfully completed, the results need to be fed into AIP Console for delivery. Subsequent analysis of the delivered databases in file format is then performed.

Where can I obtain the CAST Database Extractor?

The following database extractors are available for use

The CAST Database Extractor can extract databases from any of the following RDBMS:

Supported releases of CAST AIP for analysis of output data

The output of the CAST Database Extractor can be analyzed with any of the following releases of CAST AIP:

To use the CAST Database Extractor, the following is required:

A Java JRE must be installed on the machine on which you want to run the CAST Database Extractor:

The CAST Database Extractor can be run form on the following Operating Systems:

When attempting to run an analysis of Oracle Server source code that has been extracted with the standalone CAST Database Extractor, the analysis log may contain multiple warnings as follows:

This issue exists due to the fact that some new built-in datatypes are not extracted with the standalone extractor to avoid breaking backward compatibility with CAST AIP versions older than 8.x. If this occurs then there are two workarounds available to you:

The CAST Database Extractor is provided as an executable JAR file, which can be launched by double-clicking it. However when doing so you will likely encounter Java "out of memory" exceptions especially when extracting large or multiple databases/schemas. CAST therefore highly recommends that the executable JAR file is launched via a batch file containing the following commands:

The java -XMX1024M command allows you to configure the Maximum Java Heap Size of your JVM. Change the figure to match the number of MB you want to allocate to the process – i.e. increase the memory allocation until you no longer receive errors (CAST recommends starting at a minimum of 1024MB).

Below are links to explanation of each section in the GUI:

How to extract SQL source code from a live RDBMS

The database extraction process is a two-step action:

These two steps can be run together, or separately in the CAST Database Extractor and shown by the menu option below (for the GUI):

Use the following information to help you decide how to proceed: 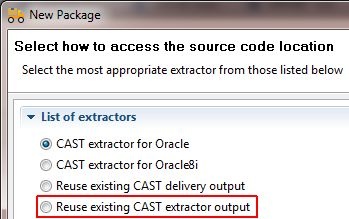 How to run an extract/initialize with the GUI

Launch the CASTDBGUI.jar file using your batch file. The following will be displayed: When launched, you need to:

If the process is successful, you should see the following output:

How to run an extract/initialize with the CLI

The CAST Database Extractor can be run in CLI mode should you wish to automate the extract/initialize process.

When using the command line, the process consists of a set of instructions and commands contained in a batch file (.bat) file. When the batch file is executed, the Java tool (CASTDBGUI.jar) is launched and the process begins. If you are extracting a large amount of data (i.e. multiple schemas/databases or one very large schema/database), you must use a batch file that contains specific Java Heap Space configuration commands (the -Xmx command), otherwise you will likely receive out of memory exceptions. Below is an example batch file for launching the .JAR tool.

If the extraction is successful, you should see the following output:

The following table lists all available commands for the CAST Database Extractor when run direct from the command line:

What happens if an object is compiled or modified when the extraction is run on an Oracle Server?

If an object is compiled during the Package action, then a warning is raised in the log and the extraction will successfully complete with the message Execution succeeded (this means that the .castextraction file will be generated and can be used without any further issue: compilation does not modify the object scripts). Example from the log:

If an object is modified during the Package action, then an error is raised in the log and the extraction will fail with the message Execution failed (this means that the .castextraction file will be generated but must not be used: a modification will change the object scripts and the schema will therefore be inconsistent and the Package action must be re-run). Example from the log:

What to do with the output from the CAST Database Extractor

Once you have successfully run the CAST Database Extractor to extract the required schemas/databases, the next step is to deliver this output. See SQL - Prepare and deliver the source code for more information.