Inside a PSB file, the PCB connects to the database:

Then we have the definition of the DBD IMS file:

This IMS file calls the dataset of the JCL file, that calls the PSB file. The logic dataset name is set as GSAM01 and this is found when creating the JCL dataset:

The Mainframe Analyzer will handle this scenario by linking the IMS file to the JCL dataset via a prototype link: 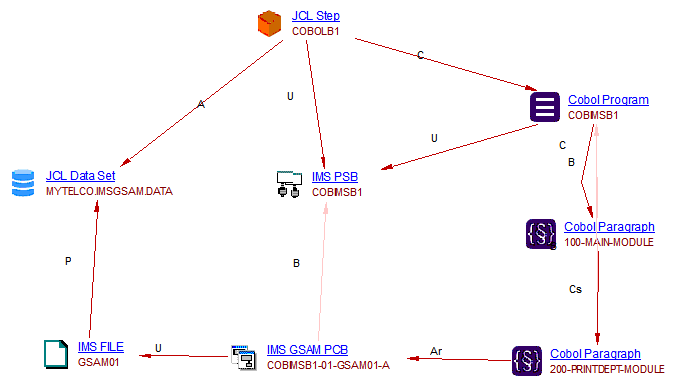 The input data from the terminal is read by the data communication modules. After editing by MFS, if appropriate, and verifying that the user is allowed to execute this transaction, this input data is put in the IMS message queue. The messages in the queue are sequenced by destination, which could be either transaction code (TRAN) or logical terminal (LTERM).

Only the CHNG DLI Call could change the value of destination code. The ISRT DLI Call will send the message to LTERM or IMS Transaction:

The Mainframe Analyzer will analyze the IMS MFS Maps file (*.mfs) so that it is possible to find out which Cobol programs use an MFS Map: