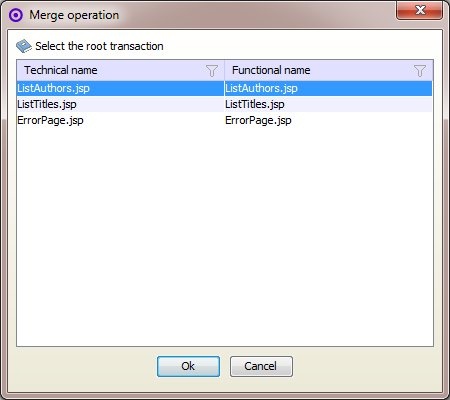 Note that the split is not permanent until you Save the changes to the server (see the Toolbar for more information about this).

In this case, when the root group includes more than one item (excluding the root), then the group of merged items will remain but the root item will be replaced by the first available item in the list of items.

If the root group includes only one item, then the merged item becomes a single Transactional Function / Data Function.

If the entry point / main table of the root item that was previously missing is then recovered, then the Transactional Function / Data Function which was associated to this will be recovered as the same object as before. However, it won't automatically become the root item of the merged items - this is because the merging information is lost. If the merge operation was achieved through a custom procedure, this merge may return to its initial state, otherwise if the merge was done manually, it has to be redone manually to get back to its initial state.