Summary: Confirming the analysis settings requires a review of technology and dependency settings.

The packages delivered through the DMT are automatically transformed into Analysis Units where project files exist. CAST AIP will automatically detect the type of source code and recommend the most appropriate analysis settings for each Analysis Unit, for example: 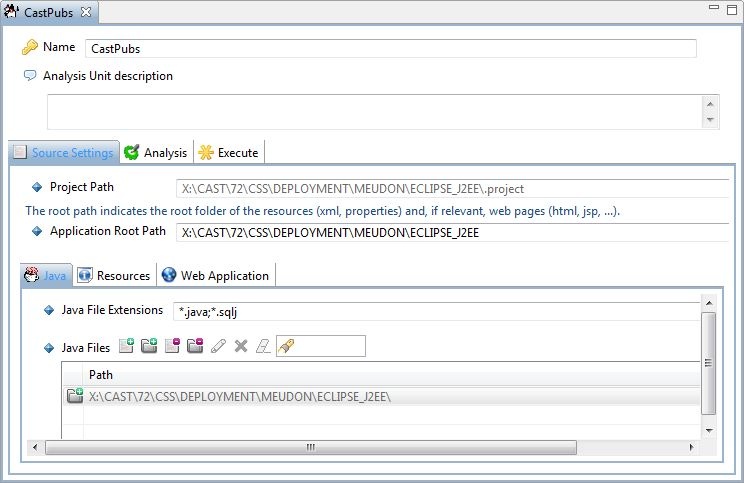 CAST's recommended best practice is to accept the suggested configuration and make any changes only retroactively to address analysis log warnings and/or errors. If the application is very big, complex or you have to make some manual changes to address unsupported conditions, you could run the Analysis in Test Mode (analysis results are not saved) and fix any issues iteratively.

For more details on auto configuration, current limitations and additional validations that should be performed by the CAST AI Admin see the following technology specific pages:

If you are using CAST AIP extensions, you may also need to consult their documentation.

This step involves checking that the dependencies settings are correct for your technologies. Dependencies are configured at Application level in the Dependencies tab.

References are traced using search strings which is less selective than parser based technology used for other links traced by the analyzer. This technology detects a reference to an object wherever its name is mentioned, regardless of the context in which this reference occurs. As a result, incorrect links may be traced if a string happens to match a given name even if it is not logically related to the corresponding object. As a result you may have to intervene to filter incorrect references - see Validate Dynamic Links.

There are three types of dependencies, explained below: 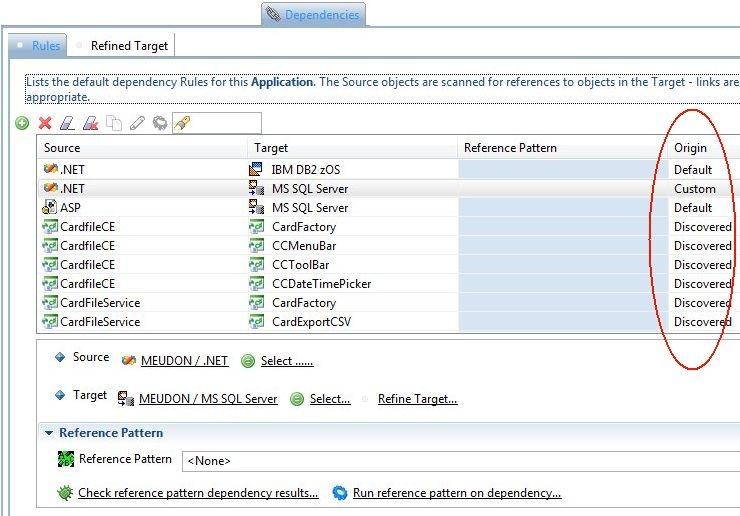 Default dependency Rules are created automatically by the CAST Management Studio between Technologies, as follows:

If no dependency Rules are "discovered" (during the package configuration in the CAST Discovery Manager Tool) between Analysis Units in the Application, then CAST will use a "default" rule defined at Technology level. Note that generally speaking database technologies do not have any technologies set as Target. The exception to this is MS SQL Server which has a default Target .NET technology.

The default rules are as follows:

In the example screen shot below, no dependencies were "discovered" between any .NET Analysis Units and MS SQL Server Analysis Units - as such a default Technology level rule was used to ensure links were created where references exist:

A more complex example of this feature is as follows. Take a situation where we have the following rules defined at Technology level:

If the following Analysis Units exist in the Application:

And the CAST Delivery Manager Tool has discovered the following dependencies automatically:

Then the following dependencies will exist in this tab:

In other words, the JEE > JEE rule has been removed because CAST has discovered that certain Analysis Units depend on others and has created specific Discovered rules for them. No dependencies were discovered between any JEE Analysis Units and SQL Analysis Units, therefore the default rule JEE > SQL will be applied. The JEE > Mainframe rule will not appear because there are no Analysis Units of this Technology type in the Application.

Discovered dependency Rules are also created automatically by the CAST Management Studio - these Rules are directly "discovered" from the source code by the CAST Delivery Manager Tool. Dependency Rules that have been "discovered" are always between Analysis Units since they are based on dependencies between projects (i.e. a classpath, for example for JEE, .NET, C/C++ etc.):

Custom dependency Rules are those that have been created manually. Typically these are created to cover a situation which the automatic Default and Discovered dependency Rules do not take into account - you will need to examine the source code manually to determine what dependencies you should create.

Another example would be where a "discoverer" does not exist for a technology and you are forced to create User Defined Analysis Units - in this case dependency rules must be created manually.

Where several client technologies (for instance Java and C/C++) or several database schemas exist, the CAST AI Admin must set the correct dependencies, overriding the default settings if necessary. The fine tuning of dependencies settings can be configured by rules in the CAST_INSTALL_FOLDER\configuration\parametrization\CustomExternalLinksRules.xml file - please see the CAST Management Studio help for more information about this.