Before computing Function Points (either in the CAST Transaction Configuration Center using the Compute option or during snapshot computation), the setup of the Application(s) will be refreshed with the content of the .TCCSetup configuration files which are present in the following locations on disk:

For the loading process, we will consider all files that match the following requirements:

After loading the configuration files, the new setup will be automatically saved.

- If an extension has been downloaded but not installed in the current triplet of schemas, its folder will be ignored (i.e. even though the %PROGRAMDATA%\CAST\CAST\Extensions\<extension folder>\configuration\TCC folder exists, it will not be taken into account).

Each one of the standard configuration files (.TCCSetup) defines a package and a version attribute. This package-version pair will be used to detect when a new package version has been released, and therefore the refresh configuration process must be triggered.

During this process, we will compare the existing package-version information stored in the Management Service schema for the current Application, with the existing package-version in the files that are present at that moment in the configuration\TCC folders in the CAST AIP installation and installed extensions folders, with three possible scenarios for each package:

The scenario 2 (package upgrade/downgrade) will work as follows:

Please note that this refresh process involves just configuration rules/sets (i.e. associations in the TCCSetup files), the other elements in these files (i.e. prefixes and ignored tables) are out of the scope and will be ignored during this process.

To enable or disable the automatic configuration refresh process, an option exists in the computation settings dialog (see Compute) which can be accessed as follows: 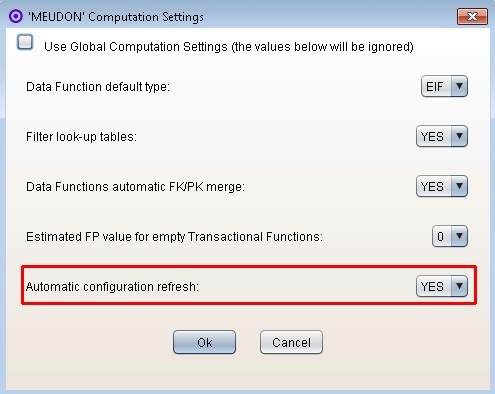 When an "old" Application runs the new refresh configuration process for the very first time (for example following an upgrade of CAST AIP to 8.3.x or above):