Summary: This section provides more detail about the support for specific C and C++ technologies and the way in which the C/C++ Analyzer extension handles them.

CAST recommends using the C and Cpp Analyzer extension which supports up to C++ 17 normalization.

Though it is possible to create a custom dependency between C/C++ and JEE, the dependency will be marked as invalid and will prevent the analysis from running: 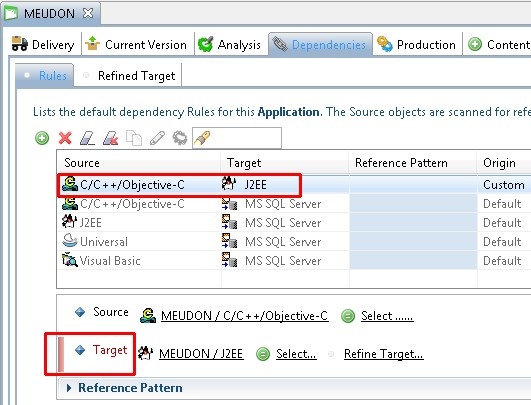 Dependencies between C/C++ and JEE are not supported as there is no functional reason to support them.

The following type modifiers for numeric constants are not supported when used inside Pro*C embedded SQL:

As an example, the following statement will cause a syntax error because the use of 'F' in 727.98F:

The syntax error occurs only when an Oracle schema is selected in the Object Manager of the C++ Analyzer job.

Precompiler directives (such as #define, #include, #if...) are not expanded when used inside Pro*C Embedded SQL. As a consequence, a syntax error can occur when a file is included (using #include) or when conditional statements exist (inside #if ... #else) and the resulting code is syntactically incorrect without expansion.

A C++ link may possibly have several different associated pieces of code (in various files). When a server object is referenced in several files for a same Caller, CAST's Dynamic Link Manager will only display references found in one file.

In this example, T1 is a server object and function f references T1. The references are spread among two files, f1.h and f2.cpp.
Although there is more than one file that contains references to T1, Dynamic Link Manager will only display one file (either f1.h or f2.cpp) and highlight all references in it. Thus all references in the other file will not be displayed. In this example, if the file displayed by Dynamic Link Manager is f2.cpp, there will be only one reference highlighted although there is another reference in f1.h. Therefore it can be difficult to decide, if links to T1 are valid or should be ignored.

To workaround this problem, you can use CAST's Code Viewer in Enlighten. It displays all bookmarks. This allows evaluating dynamic links based on complete information.

Dynamic links will be created to macros based on the source code that is defined in a macro. However, when examining these dynamic links in the Dynamic Link Manager, the link will appear to originate in the macro and call any corresponding object based only on the strings that are defined in the macro. This is a functional limitation of the analyzer. In order to check the validity of these links, the corresponding file where the macro is defined will need to be opened manually.

Resolution of overloaded functions and operators

The analyzer does not take the const modifier of a method declaration into account, when resolving a call to an overloaded method. Example:

The analyzer does not take automatic conversions into account, when resolving a call to an overloaded method. Example:

Operators are correctly analyzed with all their properties and the links to the objects they call. However links toward those operators are not retrieved, except calls to

Implicit calls to mother class constructor/destructor from derived classes are not created.

"Friend" links from classes, functions or methods to classes no longer have bookmarks.

Sharing of properties and positions between analyses

Please note that if some sub-objects of files (functions, macros...) are shared between two analyses, their properties (position(s), comments, code line numbers, constness and the like) are also shared.
These properties usually do not depend on the analysis that identified them; but, if they do depend, they keep the value that has been set by the most recently executed analysis.

Example:
The following analyses and files are given:

If Analysis 1 is executed, the macro mymacro is created, with a location at line 3 of foo.h, and the function mainFileName() is located at line 4. If, after that, Analysis2 is executed, the function mainFileName() is now located at line 6, and line 4 no longer appears as a position. The macro mymacro behaves a little more unexpected: it is not created during the second analysis, but it is not deleted, since it still belongs to the first analysis. As a result, the macro no longer has a position in the Analysis Service, even though it still appears in the Object Browser in Enlighten.

Parsing of Template Instantiations has the following limits:

Hereafter, two examples are given to illustrate the last limitation (effective type not used):

is not recognized as returning a char*.

The following objects are created:

Due to the limitation (effective type not used), no link is created from myClass<Object> to size1. The reason is that generated instances are never parsed again with their effective arguments. Here, we should parse again MyClass, with T==Object, and resolve T.size1() as Object.size1().

The following Data Definition Language (DDL) statements inside an Embedded SQL block in a C/C++ file are not supported by the C++ Analyzer:

When analyzing a Pro*C or other Embedded SQL file containing this type of DDL statement, the C++ Analyzer will emit several "Unresolved type/name/symbol ..." warnings. The analysis succeeds but no objects nor links are created for the DDL statements. You can safely ignore these "unresolved ..." warnings as well as all errors resulting from them. Please note that the other DDL statements (Create Table, Create Index and the like) ARE supported.

Object Definition Language (ODL) files are not analyzed and are not stored in the KB.

With regard to relationships between COM objects and C/C++ objects, CAST creates links between COM Libraries and C/C++ files but not between lower level objects. Resolving function calls does not take into account function template explicit specializations.