Skip to end of metadata Go to start of metadata
See here for more information about the third-party software that is shipped and installed with CAST Imaging.

When updating from 1.7.x to 1.8.x, a license key is required before any NEW application data can be imported. Existing Application data will still be accessible to end users.

A new tool has been developed to replace the PowerShell export/import script - the tool is called etl-automation.exe and will export and import Application data into CAST Imaging in on go. You can find out more about this new process in Automation tool export and import process.

Note that the the PowerShell export/import script is no longer delivered in ≥ 1.8.x therefore you should adjust automation processes to use the new tool.

When LDAP authentication mode is enabled (see Configure authentication) and assuming that the correct group search parameters have been configured, it is now possible to assign data access permissions to LDAP groups (previously this was only possible for LDAP users). This means that it is no longer necessary to assign data access permissions to a long list of users. Some rules apply:

It is now possible to manually remove a link (previously this action was no permitted): 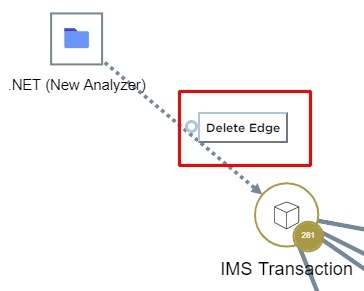