DMT - Encrypting the password for the DMT command line

This is explained in detail in Using the DMT Command Line.

When using the AUTH or PXAUTH variables in a batch file for use with the CAST Delivery Manager Tool CLI (Command Line Interface), you can pass the username and password in clear-text as follows:

However, in a secure environment, clear-text passwords may not be acceptable. For improved security, CAST recommends using an encrypted password and has therefore provided a method to encrypt the user's password and then enter the encrypted password into the command line using the -authkey or -pxAuthKey parameters in place of the -password or -pxPassword parameters as follows: 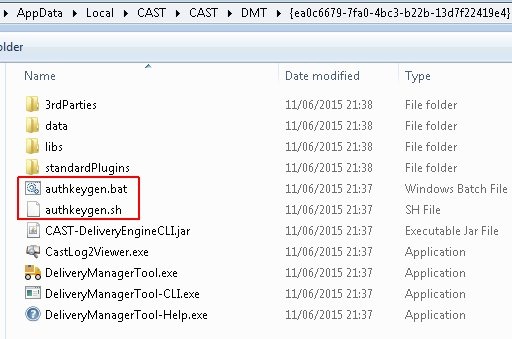 Note that an authkeygen.sh tool also exists for Linux environments.

The authgenkey tool requires that a Java JRE has been installed on the machine. This should already be the case if you have installed the CAST Delivery Manager Tool in GUI mode from the CAST AIC Portal.

The tool then requires that:

If neither of the above are true, a message will be displayed explaining this when you attempt to run the tool:

To generate an encryption key, please open a command prompt and navigate to the following location:

Then enter the following:

The tool will then prompt you for the password to encrypt:

Enter your username's CAST AIC Portal or web proxy password that you want to encrypt, then tap ENTER. The resulting encryption key value is displayed preceded by authkey:

When the encryption key has been generated, simply replace the following lines in your batch file: