Skip to end of metadata Go to start of metadata
Summary: CAST AIP 8.3.23 introduces a number of features and changes as listed below.

Starting from this release of CAST AIP, CAST Architecture Checker will no longer be installed as part of the CAST AIP setup, whether installing CAST AIP from scratch or on a server where a previous release of CAST AIP exists. CAST Architecture Checker has evolved into a standalone component where all feature requests and bug fixes are now managed. This standalone component can be downloaded from CAST Extend (https://extendng.castsoftware.com/#/search-results?q=archichecker): 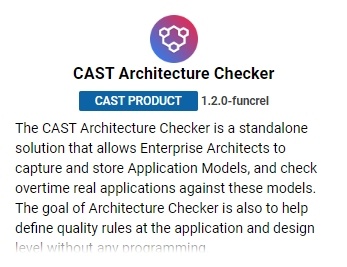 For more information about the standalone release, how to install it and how to use it, please see CAST Architecture Checker.

In CAST AIP ≥ 8.3.23, if a JAR named after the name of the requested artifact is provided in the source code folder, it is accepted and a missing artifact alert is no longer raised. Previously, a manual remediation task was required to associate a JAR to a missing Maven project. Now, it is automatic. As a result of this change, for Maven projects, there may be no need to provide a Maven resource package if the corresponding JAR files have been provided in a sub-folder of the source package.

Note that this behaviour does not apply to Gradle based projects. Any required Maven repositories must be delivered manually.

In CAST AIP ≥ 8.3.23, the CAST Delivery Manager Tool will remove non-standard qualifiers before comparing the Maven versions, so that, even if the plain version is lower than the qualified version, it can be accepted as a suitable version.

Change to support of org.springframework.jdbc

In previous releases of CAST AIP, support of the API org.springframework.jdbc for the User Input Security feature relied on automatic blackboxing. In CAST AIP ≥ 8.3.23, this has now changed and static rules will be used instead. Note that this change may impact existing analysis results.

A minor change has been made to change a message level from WARN to INFO:

The following changes have been applied to rule documentation (no impact on analysis results):

Previously when uploading a .TCCSetup file which already existed and where the package-version of the file differs with the existing package-version in the Management schema, the following behaviour was used: each rule will be loaded with status active by default, except if the rule was present in the previous version, its definition is unchanged, and it had been manually deactivated by the user, in that case, the rule will be set to inactive as well.

From CAST AIP 8.3.23, this behaviour changes as follows (see also TCC - Working with standard configuration files (.TCCSetup)):Each rule which was present in the previous version will be loaded with the same status as before, whichever the definition of this rule is the same or has changed. In this latter case, a warning will be logged to inform the user of this change, as in the example below where both the definition of an active Entry Point rule and of a deactivated End Point rule have both changed in a new version of the 'Base_HTML5' package: