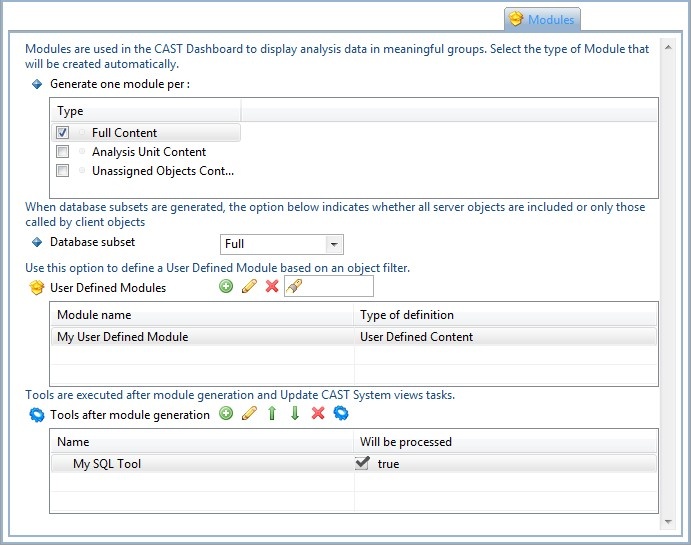 This tab is used to manage the Modules (both automatic and user defined) for your current Application. Modules are used extensively in the CAST Dashboard as a means to configure analysis results into meaningful groups or sets for display purposes - indeed objects cannot be seen in the CAST Dashboard if they are not part of a Module. The content of a module is based on source code.

CAST has a built in feature which can automatically attach server objects used by client source code to a specific project (known as a database subset) in the CAST Analysis Service. The subset can then be visualized in CAST Enlighten as shown below (outlined in red): 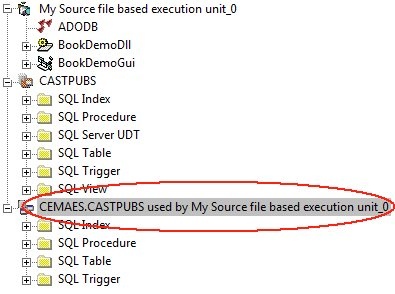 These subset projects are supplementary to the server "projects" created via standard analysis of your server objects, but the objects they contain are simply "display copies" of the actual server side objects and are not stored in the CAST Analysis Service as duplicate objects.

Several conditions and options must be met and selected before a subset project will be created. The following is a list of options/scenarios that affect the creation of a subset project and the objects that are contained in it:

In addition to automatic Modules, the CAST Management Studio offers you the option to create User Defined Modules - these Modules can be configured to contain the content you require for display in the CAST Engineering Dashboard. Content is configured via an Object Filter on your analysis results (using the Technology, Analysis Units, Object Types and Object Names filter criteria) in order to define the content you require.

Use this section to configure an SQL Tool to run immediately after the the Modules have been configured and run during a snapshot generation: 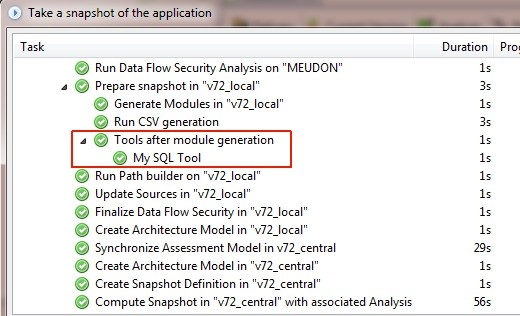 You can find out more information about the SQL Tool in the Content Enrichment tab in the Application editor.