Although source code type is detected by the DMT during the delivery, it is recommended to confirm this setting at Analysis Unit level. 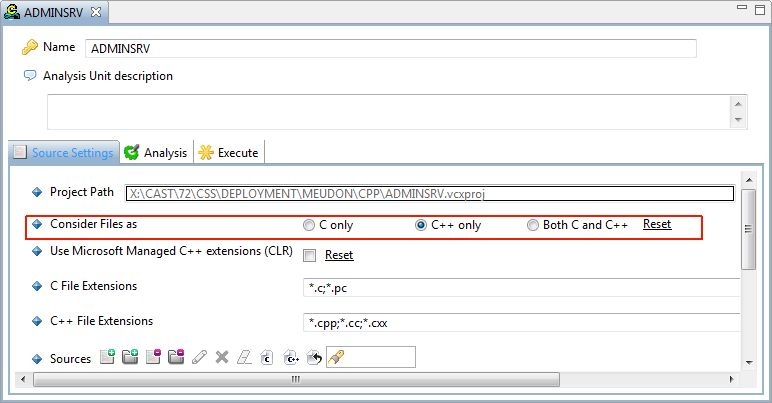 In cases where some source files contain source code that does not correspond to the extension (e.g.: "main.c" contains C++ code), then it is possible to force the language for this file. If unsure select Both C and C++.

Normally, the source code discoverer will configure the Analysis Unit and analysis settings. However, in some circumstances, these settings may be incorrect and must be adjusted manually. The main parameters to work on are as follows:

These are all located in the Analysis Unit editor: 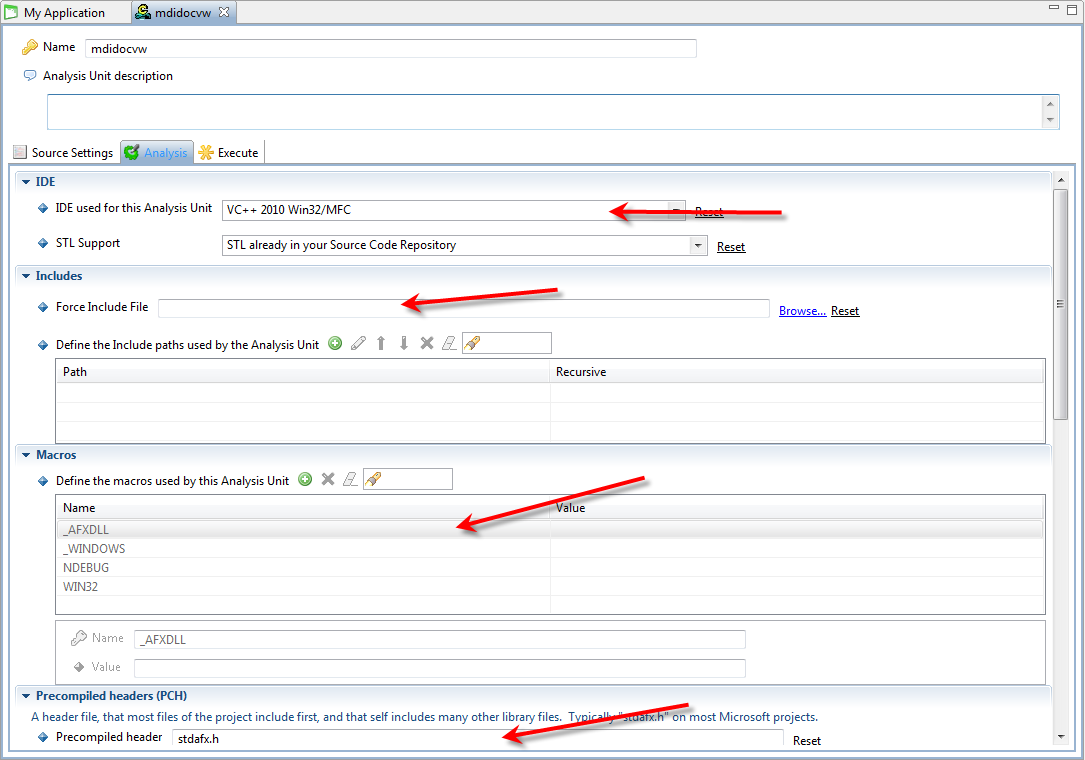 IDE used for this Analysis Unit

This option allows to select the compiler, the version of the compiler, and the type of project that is build from the source code. It is automatically set up for MS Visual C++, thanks to vcproj and vcxproj project files. For other projects, it is generally necessary to adjust it.

Select the include paths

The include paths are locations from where the included headers are found. These parameters should be identified from the compilation directives. The files found in these include paths will be saved in the Analysis Service. Thus, the only header paths you should mention here are:

The C++ Analyzer provides a feature that will scan the source code in order to detect missing header paths and macro definitions. This feature is available through the action Test analysis on the current Analysis Unit in the Execution tab of the Analysis Unit editor. The tools delivered in the CAST Implementation Framework are therefore no longer necessary.

You should not reference here any third party software header paths (see previous section). Also files that are common to several jobs should be defined in an Environment Profile. Note that include paths defined directly in the job are searched first. Include paths defined in Environment Profiles have a lesser priority. As for the compiler, inclusions defined within "" are searched within the path of the file being analyzed, while inclusions defined within <> aren't.

You should also avoid adding more include paths than required: the search for an included file in the include path list occurs regularly and too many unnecessary paths will affect performance.

Note that the Include paths are not recursive unless you choose them to be: as such the default behavior is that sub-folders of the folders mentioned in the lists are not considered as potential include paths if not explicitly added to the list (nor are they in the compiler options of the output from the Macro Analyzer, so you should report them as is). However, if you have an include like #include "dir1/file1.h", you should select the directory containing dir1, not the one containing file1.

Defining include paths for Microsoft compilers

Usually, if the Microsoft C++ compiler is installed on the analysis machine, you just need to select the default "Microsoft VCxxxx" environment profile (via the IDE used for this Application (or Analysis Unit) option). In some cases, you may also need to provide your include list yourself. The following rules should be followed:

In any of the three cases above, you will get an error message during the analysis such as:

Include paths for Microsoft compilers should resemble the following:

(the third one is for <windows.h> etc., the exact value for xx.xx depends on your exact installation)

The "Force inclusion file" option is used to provide an extra header file which will be appended at the beginning of the preprocessed source, as if each source file were beginning with a #include directive on this file. It is useful in the following cases:

You should indicate here the "ExternFunctions.h". If you have several files to "force include", all you need to do is to create an additional file that will include them (using the #include directive) and set this file as being "force included".

The macro definition should contain all the implicit and explicit macros used to compile the application. The implicit macros depend on the Operating System and compiler used.

In 7.1, the C++ Analyzer provides a new feature allowing to scan the source code in order to detect missing header paths and macro definitions. This feature is available through the action Test analysis on the current Analysis Unit of the Execution tab. Then, the tools delivered in the CAST Implementation Framework will not be necessary anymore.

If the project contains a precompiled header, then the related settings can be specified in this section.

Environment Profiles should be used as often as possible to accelerate the implementation. Some Environment Profiles are delivered by CAST (often named as "default profiles"), and you should use them to benefit from CAST's expertise and maintenance. You can also create your own profile for situations where code you have to analyze relies on third party software that CAST does not cover and that you may meet again in the future.

Creating your own Environment Profiles

The custom Environment Profiles should contain the include paths and macros that are required in the jobs to handle third party software. If you have to create you own Environment Profiles, try to use macros (based on environment variables, registry keys, …) in the paths (e.g: include paths) whenever possible, so that those paths are dependent on the configuration of the analysis machine.

During source code delivery acceptance phase (see Validate and Accept the Delivery) some inspections are performed to ensure all headers required to compile C/C++ projects are included as apart of the delivery.

The best way to do this is as follows: