This documentation page is part of a legacy method of installing CAST AIP. This documentation is no longer maintained and may contain obsolete information. When using AIP Console, AIP schemas are installed automatically when creating an application. Refer to Installation and Configuration and Add a new Application.

Summary: Before proceeding with the installation of the CAST databases (CAST Management, Analysis, Dashboard and Measurement Services), various RDBMS installation requirements must be met. In addition, the modification of certain configuration settings for your target RDBMS can enhance and improve the overall "CAST experience" and is therefore strongly recommended by CAST.

Please note that if you are using the CAST Storage Service, no installation requirements need to be met - unless you are planning to use user defined tablespace. Please see Appendix - CAST database - creation and configuration options for more information.

The following sub-chapters are dedicated to each supported RDBMS. In each of them you will find the following sections (if an adjustment is recommended by CAST):

Before going into details about these specific DBMS implementations, here are some general guidelines:

Characters are encoded in different ways called "character sets" - one example is "ASCII". Many different character sets exist. In the early 1990s, UNICODE was created to encode any character of any alphabet. It is impossible to directly compare a character string encoded in ASCII with another string encoded with UNICODE (for example), even if they contain the same elements orthographically. In fact the width of the encoding in UNICODE is double that used in ASCII and the notion of collation will provide the ability to resolve this problem.

Collation refers to a set of rules that determine how data is sorted and compared. Character data is sorted using rules that define the correct character sequence. The influence of case (this is of particular relevance for Microsoft SQL Server/Sybase ASE: "CS" = Case Sensitive, "CI" = Case Insensitive), the influence of accented characters, kana character types and the sensitivity to storage width: ASCII/EBCDIC uses 2 bits and UNICODE uses 4 bits.

How do the RDBMS manage collation and sort order?

It is currently possible to analyze Microsoft SQL Server / Sybase ASE and store it in a CAST Analysis Service hosted on any supported RDBMS. However, in both of those environments, there are some limitations with regard to collation compatibility that are currently attached to the product as shown in the table below:

For example, with regard to case (CS,CI), there will be no link related problems if the entire set of analyzed code contains identifiers that use the same case:

However, using another example, link resolution may fail during the analysis if the preceding condition is not respected. In the example code below, "t" and "T" represent the same object with regard to a participating server, but are identified as different objects with regard to the collation of the CAST Analysis Service.

Pool memory (SGA and PGA) can be changed via OEM (Oracle Enterprise Manager) or via SQL scripts.

If you have access to Oracle Enterprise Manager, use the following screenshots as examples for your own Pool Memory settings. 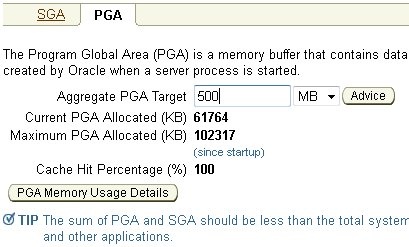 Note that you may need to disable Automatic Memory Management to modify SGA and PGA memory values.

If you do not have access to Oracle Enterprise Manager, you can make Pool Memory changes using an SQL script command (i.e. via SQL*Plus or equivalent) as follows.

The basic syntax to use is as follows:

If you want to check the value of any of the above parameters prior to modification, use the following syntax:

When installing a new schema (via CAST Server Manager) on an Oracle Server specifically for CAST, it is necessary to specify tablespace. This can be existing tablespace (USERS, TEMP etc) on your Oracle server, or you can create dedicated tablespace for Data, Temporary, Tables and Indexes as required.

To create tablespace, use the CREATE TABLESPACE statement, for example:

To size your tablespace, use the following table as a very approximate guide (where objects = the number of objects stored in the CAST Management, Analysis, Dashboard and Measurement Services):

During an analysis process, depending on the volume of analyzed code, the Undo tablespace (RollBack Segment) can sometimes exceed 3GB in size. Make sure that the undotbs parameters are set in such a way that the associated file can grow as needed (and that you also have enough space on disk).

In addition, before generating snapshots, it may be necessary to increase the size of the Undo tablespace (RollBack Segment) to approximately double that of the total amount of analyzed data stored in the CAST Analysis/Dashboard Services (although more than double can sometimes be required). If this adjustment is made, it must be done after the CAST System Views are updated, but before the snapshot is generated (in other words, after the analysis process - note that in the CAST Management Studio it is possible to run an analysis and then generate a snapshot as two separate functions, thus allowing you to adjust the Undo tablespace if required). The Undo tablespace value can be reset on completion of the snapshot generation process.

The Archive Log option provides a means to trace changes made to the schema hosting the CAST Analysis Service. This operation produces a large amount of log data and consumes a great deal of CPU resources. As a result, performance could dramatically deteriorate. CAST therefore recommends that the Archive Log option is NOT activated when working with the CAST Analysis Service.

The following Oracle user privileges are required to carry out any server-side install procedure with CAST Server Manager (i.e.: the username/password combination specified in the CAST Server Manager Connection Profile (see Connection in Install CAST AIP schemas) that you used to connect to the server, must have the following privileges). If this is not the case, the installation procedure may fail.

Please note that these user privileges MUST be granted directly to the user and NOT via the use of a role. For example, if you grant these privileges to a role, and then give the user you use to carry out the installation procedure this role, then the installation may fail.

Privileges granted to the user created during the installation process

CAST Server Manager grants the following privileges to the username created during the installation of a new schema for the CAST databases (CAST Management/Analysis/Dashboard/Measurement Services). For example, if you create and install a new schema called "CASTTEST", a user also called "CASTTEST" will be created and granted the Oracle system privileges listed below:

Minimizing privileges for the user created during the installation process

The user created during the installation of a new schema is granted the SELECT_ANY_DICTIONARY privilege in order to query the V$SESSION data dictionary view. CAST uses this view to retrieve the session id of the user's connection for its internal locking mechanism to manage concurrent access to objects in the CAST Management/Analysis/Dashboard/Measurement Services.

If you do not want to give the SELECT_ANY_DICTIONARY privilege to the user created during the new schema installation process, you can revoke the privilege by executing the following query (where "CASTTEST" is replaced by the name of the schema that hosts the CAST Management, Analysis, Dashboard or Measurement Service):

This must be done after installation of the CAST Management/Analysis/Dashboard/Measurement Services and only the SYSTEM user can grant this privilege.

Reasons for granting these privileges

...are the minimum required privileges for a user designated as a schema owner.

This privilege is granted to the owner of the new schema because it allows read access to certain Oracle system tables to:

All other operations are carried out using the user name associated to the schema you are attempting to install the CAST Management/Analysis/Dashboard/Measurement Services on. In this case, the privileges granted to the user name will be used.

When manually creating connection profiles to a CAST Analysis/Dashboard Services for use with the CAST Management Studio, CAST Enlighten and CAST Report Center, if you use a user other than the Analysis/Dashboard Services owner or the "system" user with its own privileges, you may find that you cannot perform some actions within the end-user CAST application (typically generating a snapshot in the CAST Management Studio) and an "insufficient privileges" message is displayed in the log.

As such and given that the "public" user is automatically granted access to all CAST objects, an Oracle user that wants to connect to a schema that they do not own requires the following privileges:

When using Oracle Server 10g and later to host the CAST Management, Analysis, Dashboard or Measurement Services, you should make sure that SQLNet authentication is set specifically for use with CAST. Locate the network\admin\sqlnet.ora file and make sure that the following line is as shown below:

CAST Products will run in either Native or Interpreted mode, provided that each mode is set up correctly on the Oracle instance that you are installing CAST databases on:

On an Oracle Server, each instance can run a different Oracle Server version. In order to check the version an instance is running, use the following command:

If the value returned for the CURSOR_SHARING value is anything other than "EXACT", then please execute the following against the server:

From a DBA perspective, it is better to use a fixed memory size rather than the dynamically adjusted memory size (which is the default). The recommended value is 75% of the physical memory of the server when the machine is a dedicated data server. Nothing else. If this is not the case, then you need to reduce this value as a compromise between each "intensive" process.

CAST recommends using different physical disk systems for the data and the log. However, system and tempdb databases should be on the same disk, which, in turn, should not be the disk used to store the CAST database. The tempdb file size growth must be specified in absolute values (i.e in megabytes, not percentage).

Before calculating snapshots, it may be necessary to increase the size of the Transaction Log to approximately double that of the total amount of analyzed data stored in the Analysis/Dashboard Services (although more than double can sometimes be required). If this adjustment is made, it must be done after the CAST System Views are updated, but before the snapshot is calculated (in other words, after the analysis process - note that in the CAST Management Studio it is possible to run an analysis and then generate a snapshot as two separate functions, thus allowing you to adjust the Transaction Log value if required). The Transaction Log value can be reset on completion of the snapshot calculation process.

The following Microsoft SQL Server user privileges are required to carry out any install procedure with CAST Server Manager (i.e.: the username/password combination specified in the CAST Server Manager Connection Profile (see Manually creating a connection profile in Install CAST AIP schemas) that you used to connect to the server, must have the following privileges). If this is not the case, the installation procedure may fail.

When using any CAST products (CAST Enlighten etc.) in a Microsoft SQL Server environment make sure that the login has been granted the VIEW SERVER STATE privilege. This is not necessary if the "sa" or "sysadmin" logins are being used (not recommended), which already have this privilege.

This privilege grants access to the server's current process list via master..sysprocesses or via sys.dm_exec_requests. This information is required by CAST products for internal management of database locking and the analyzer save process.

To avoid product usage errors, users will be prevented from accessing the database if their login does not have access to the current process list.

The following rules must be adhered to: