Summary: The following sections provide a brief explanation of the installation/configuration process for Apache Tomcat when you want to deploy a WAR file. This documentation is not intended to replace the Apache Tomcat official documentation and is simply for reference only. Note that CAST also provides ZIP files based on Spring Boot for deploying CAST dashboards without the need for Apache Tomcat.

A CATALINA_HOME environment variable is required regardless of the operating system used to host Apache Tomcat.

It may be necessary to modify the default memory settings for Apache Tomcat to improve the performance of your deployed dashboards. CAST recommends the following formula for determining the maximum memory allocation to configure on Apache Tomcat:

In some circumstances, whilst using a CAST dashboard, you may receive Low Memory/Recovered Memory/Out of Memory errors or exceptions, for example:

These errors and exceptions are displayed by the Java Virtual Machine (JVM) and they indicate that the Java Garbage Collector is in operation. As a result, you may see a slow down in performance. You can ignore these errors, however, if they persist, it is possible to modify the JVM memory configuration settings on the machine hosting the Apache Tomcat server to resolve the problem.

The procedure for modifying the JVM memory settings is dependent on how you have installed Tomcat - either as a service or standalone (launched via the command line).

Installed as a Windows Service

If you have installed Apache Tomcat as a service, the process "Tomcat7.exe" or "Tomcat8.exe" will be visible in the Processes tab in Windows Task Manager. To modify the JVM memory configuration: 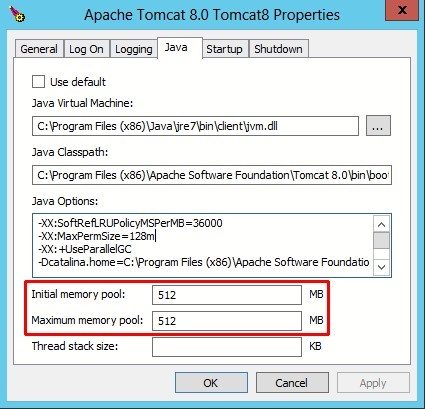 Installed as a standalone program

If Apache Tomcat is installed as a standalone program and is launched from the command line, CAST recommends using a wrapper script file with the following parameter line:

This will set the JVM memory configuration settings as follows: - Initial memory pool = 512MB, - Maximum memory pool = 512MB (these are the minimum values that CAST recommends - you should increase these values until your low memory/out of memory exceptions have been resolved). An example wrapper script for Microsoft Windows to launch Apache Tomcat with the above configuration is shown below (modify to suit your own environment):