When you have completed the calibration process, you now need to Compute the results. Essentially this means forcing the CAST algorithm to recalculate the Automatic Function Point (AFP) values for objects that are:

In addition the Compute option will display the results in the AFP Calibration node.

To compute the Function Points:

If you have run an analysis and you then attempt to run the Compute action, the CAST Transaction Configuration Center will prompt you that no snapshot data is present:

The CAST Transaction Configuration Center requires a special function (the pre-snapshot preparation action) to have been run before the Compute action can be run - this is to ensure that the Function Point data for Data Functions and Transactions is correct and up-to-date. The pre-snapshot preparation action is executed as part of a snapshot generation, as such, CAST recommends that you generate a snapshot before you attempt to run the Compute action. However, generating a snapshot can be time consuming particularly if you are generating multiple snapshots to take into account small adjustments in the analysis configuration to correctly analyze the Transactions and Data Functions you require.

In previous versions of CAST AIP, this issue was avoided through the creation of a specific Snapshot Preparation Assistant job that could be configured to run automatically immediately after running an analysis - or independently - this was then sufficient to run the Compute action in the CAST Transaction Configuration Center. In the current version of CAST AIP, the Snapshot Preparation Assistant is no longer available, therefore, and in order for you to avoid having to generate a snapshot each time you change your analysis configuration, you can do one of two things:

Run a pre-snapshot preparation in the CAST Transaction Configuration Center

If you attempt to run the Compute action and no snapshot is present (and you have already run the analysis), then the following dialog box will be displayed:

Run a pre-snapshot preparation action via the command line

When the compute action is run, the CAST Transaction Configuration Center will also run the Generate sets action to obtain the most up-to-date data. Note that when two sets have been created with identical rules/criteria so that they capture the same objects, only one of the sets will be used and the other will be ignored.

By default for the Compute action, the CAST Transaction Configuration Center will assume various default settings:

All options can be set as follows:

To change the configuration at global level for ALL Applications: 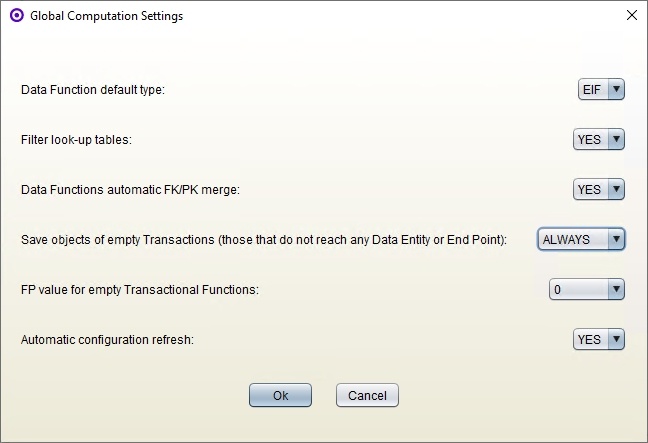 To change the configuration at Application level: 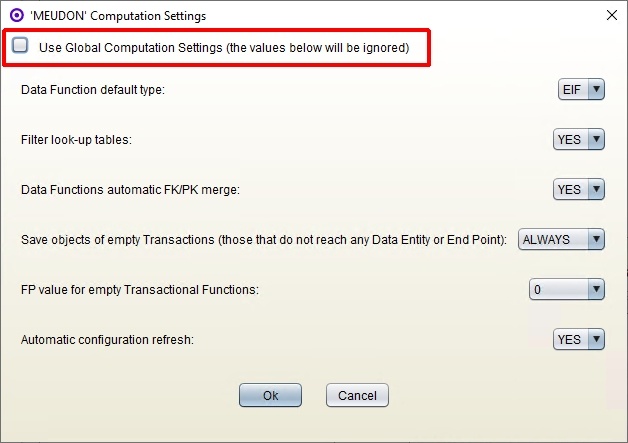 This option allows you to choose between the EIF and ILF computation type:

As mentioned previously, CAST AIP will compute all Data Functions in ALL Applications using the EIF (External Interface Files) type. If the Data Function is linked by Update/Delete/Insert/Write links, its type will be changed to ILF. This can be seen in the following example where the compute action is set to the default "EIF":

If the compute configuration is changed globally for All Applications or at Application level to ILF, then CAST AIP will compute all Data Functions in ALL Applications using the ILF (Internal Logical File) type. If the Data Function is only linked by Select/Read links (i.e. it has no Update/Delete/Insert/Write links nor any UNTYPED Use links (when the type of the link has not been completely determined by the analyzer)), its type will be changed to EIF.

As defined by OMG CISQ AFP Specifications (see Built-in parameters node - Right hand panel), the elements identified as "lookup tables" will be filtered out and NOT considered as Data Entities. This will be the default behavior, but it can be changed if you prefer to deactivate this filter by changing the selector to "NO":

The CAST Transaction Configuration Center may automatically merge a certain table as "Detail" of another one based on Foreign key (FK) and Primary Key (PK) relationships (see How does CAST determine which tables are considered as detail in a Data Entity?). This is the default behavior, following the OMG CISQ AFP specifications. However, this feature can be deactivated by changing the selector to "NO":

Warning: If this setting is deactivated and then later reactivated, the automatic merge based on Foreign Key (FK) and Primary Key (PK) analysis will only take place if both elements (main and detail) are NOT calibrated. If any of the involved elements is in a calibrated situation (ignored, deleted, manual merge, etc.) the FK-PK automatic merge will not occur.

Allows you to change whether objects that are part of empty transactions (those that do not reach any Data Entity or End point) should be saved. The default position is ALWAYS:

Allows you to define a "default" pre-defined Function Point value to be used for empty transactions:

The possible values are: 0, 3, 4, 5 ,6, 7 and ASSESS. The selected value will be applied to the transactional functions that have a 0 Function Point value after the computation process. The default FP value items will be flagged in the AFP Calibration node (see Data Functions/Transactional Functions sub-nodes - Right hand panel) with a green icon: 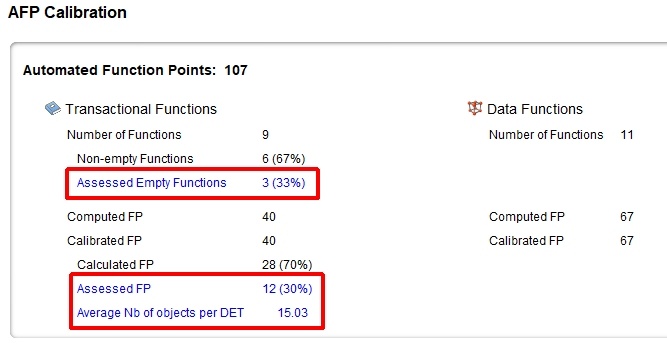 Since it is possible to set an default Function Point value for empty transactions, these are now considered as valid and can be displayed in the CAST AIP dashboards via the Unadjusted Transactional Functions metric (10204). A complementary information on the function point detail contains the string ": Estimated" which indicates that the transaction has a default FP value:

- If a Default FP Transactional Function is ignored during calibration, the "ignored status" will prevail and therefore it will still be sent with Function Point = 0 (and no "Estimated" indication)

When the Compute action is run, the Log will contain a Function Computation report to help you see what has occurred, for example: