Summary: this page describes how to configure the maximum number of parallel job executions that Console can perform per Node.

By default, Console will be configured (using the threadPoolSize parameter) to run a maximum of two (2) jobs in parallel on each Node. A job is any type of execution using Console, for example:

Executions that are not deemed as jobs and which are therefore not covered by the threadPoolSize parameter are:

If the maximum number of parallel job executions is reached, the next job will wait in a queue and the following will be displayed in Console until a slot is free: 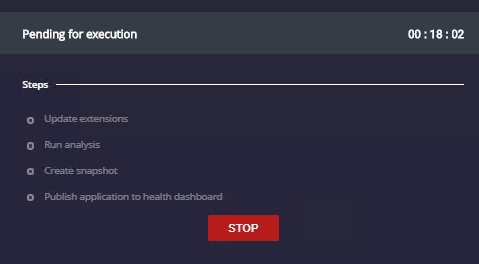 The number of parallel executions can be increased if required (configuration steps are described below), but caution must be taken since performing parallel executions can cause the Node to be overloaded, which in turn can cause performance reductions, timeouts and other errors. Increasing the value too much can also cause jobs to crash entirely. A reasonable value to use depends entirely on the specification/hardware on which the Node is running and therefore CAST strongly recommends only increasing the number of jobs by one and to then perform tests to see if the new value is appropriate before any further increase in the number of jobs is configured.

Above all, if you require additional processing power for your Application analyses, the best practice is to add additional AIP Nodes to balance the load, rather than increasing the number of parallel jobs on a single Node.

A configuration file is available on EACH Node to configure this change therefore if you have more than one Node, you will need to make this change on all Nodes where you would like to increase the number of parallel executions. To do so, first locate this file:

Edit the file with a text editor and locate the following line:

Define the custom number of parallel job executions you require. For example:

Save the file when the changes are complete.

Restart the Node(s) to ensure all changes are taken into account: