The Console authentication provider has been totally restructured and now uses the open-source OAuth2 compatible Keycloak system. Keycloak provides local authentication, and can also interact with other enterprise authentication systems such as LDAP and SAML. This change greatly simplifies the configuration of the authentication method you choose.

As a result of this change:

All registered Nodes are shown in the Nodes tab in Administration Center as in v. 1.x:

The management of CAST Storage Service/PostgreSQL instances that will be used for your analysis schema storage and for your Measurement schema has changed in Console v.2. See Administration Center - Settings - CSS and Measurement settings.

CAST Storage Service/PostgreSQL instances for analysis/snapshot schemas are now configured directly in Console in the Administration Center under the Global Configurations option, instead of when installing a new Node:

By default, one database connection will already be predefined. This is a connection to the PostgreSQL Node database provided as a Docker container and is used to store options and settings common to all Node instances. It is possible to use this database for your analysis/snapshot schema storage needs, however this is not recommended and you should instead define additional CAST Storage Service/PostgreSQL instances. 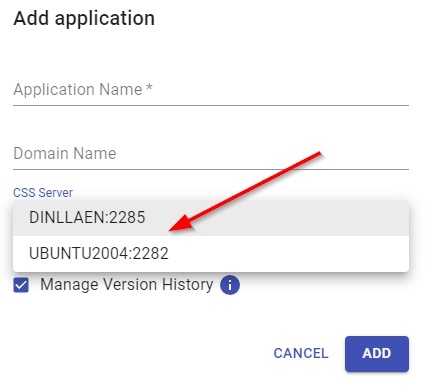 You can find more details about this in Configure your CAST Storage Service or PostgreSQL instances - v. 2.x and Administration Center - Settings - CSS and Measurement settings.

The Measurement schema is required for consolidating snapshot data from all Nodes for display in the CAST Health Dashboard. The initial start-up wizard no longer prompts you to define your Measurement schema and CAST Storage Service/PostgreSQL host - instead Console is preconfigured to use the built-in Node Database, therefore if you do not wish to use this host, ensure you configure an alternative host in the Administration Center under the Global Configurations option: 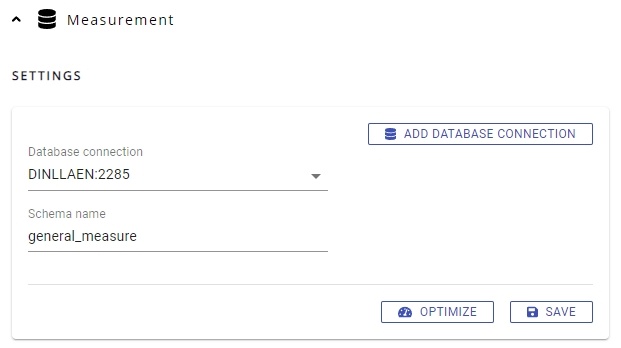 You can find more details about this in Configure your CAST Storage Service or PostgreSQL instances - v. 2.x and Administration Center - Settings - CSS and Measurement settings.

2.0.0-beta2 provides a new Docker container dedicated to the Health and Engineering Dashboards:

No configuration is required other than assigning the correct roles to users/groups to allow them to access the application data they need - this is explained in Configure authentication and roles using Keycloak - v. 2.x. Access to the Dashboards is exactly as in v. 1.x:

Initial start-up with no applications

When Console starts up and no applications have been created you will see error messages in the dashboard container log. You will also notice an error if you try to access the Dashboards  (either Health or Engineering Dashboard). This is expected as Console will not create the database that Dashboard will use until an application has been analyzed and a snapshot generated.

Once you have run an analysis and created a snapshot for an application these error messages will disappear.

You can assign the same access roles to your users/groups as are provided in standalone CAST Dashboards - see User roles. These roles are defined directly in Keycloak and are provided out of the box and are explained in Step 2 in Configure authentication and roles using Keycloak - v. 2.x:

Application data should be automatically synchronized between Console and the embedded Dashboards, during the Application analysis/snapshot; namely during the "Create Snapshot" and "Publish to Health Dashboards" job steps. This synchronization process will reload application data from the CAST Storage Service(s) / PostgreSQL instance(s) to retrieve the latest information regarding analyses.

Should data not be synchronized correctly you can manually perform a synchronize action in the Administration Center under System Settings:

If you have upgraded from 2.0.0-beta1, you should run a manual Synchronize action to ensure that the applications that existed previously are now made available in the 2.0.0-beta2 Dashboards.

The interface has changed slightly and Applications that can be upgraded are now indicated in the UI using a specific icon:

Clicking the icon will open a dialog box allow you to choose the target release of AIP Core: 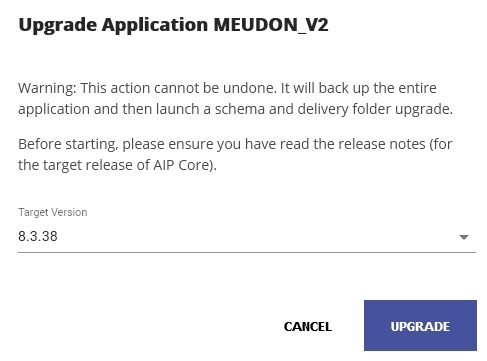 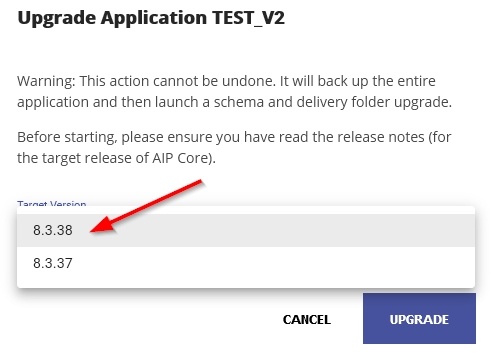 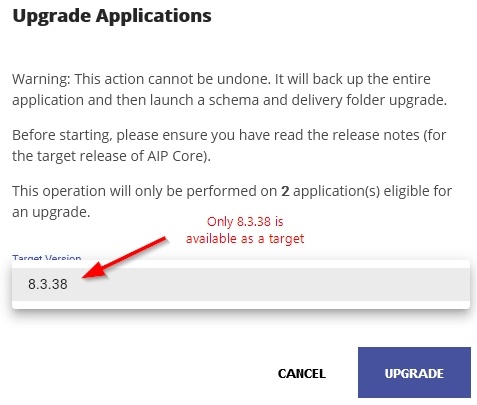 Architecture Studio features have been moved from Console to the Node instance. This change is nearly entirely invisible to end-users (except that Architecture Studio now uses the same upload folder for portfolio and application model files), however, the majority of the back-end operations have been simplified as there are no longer any upload/download of files between Console and Node, and no request wrapping, etc.

When no Node instances are available (i.e they are down for maintenance, or network issues prevent them from reaching Console), no functionality is available in Console and a flashing warning message is displayed: