New release to correct an issue with the use of mapped drives in the CastGlobalSettings.ini file on an AIP Node.

New release to correct an issue with the synchronization of authorizations between AIP Console and integrated dashboard when LDAP security mode is enabled.

New release to correct an issue with storage path syntax in the aip-node-app.properties file preventing the AIP Node from functioning correctly.

Note that CAST highly recommends updating to the new release of AIP Console to take advantage of new features and bug fixes. See Upgrade process for more information about this.

When upgrading to 1.13.x from a previous release of AIP Console, you should take note of the following information:

Why will this split occur?

Inside each Application specific subfolder, you will find the exact same folder structure as used in Delivery folder before upgrade:

When is the split actioned?

The Delivery folder split will be actioned during an upgrade to AIP Console 1.13.x: 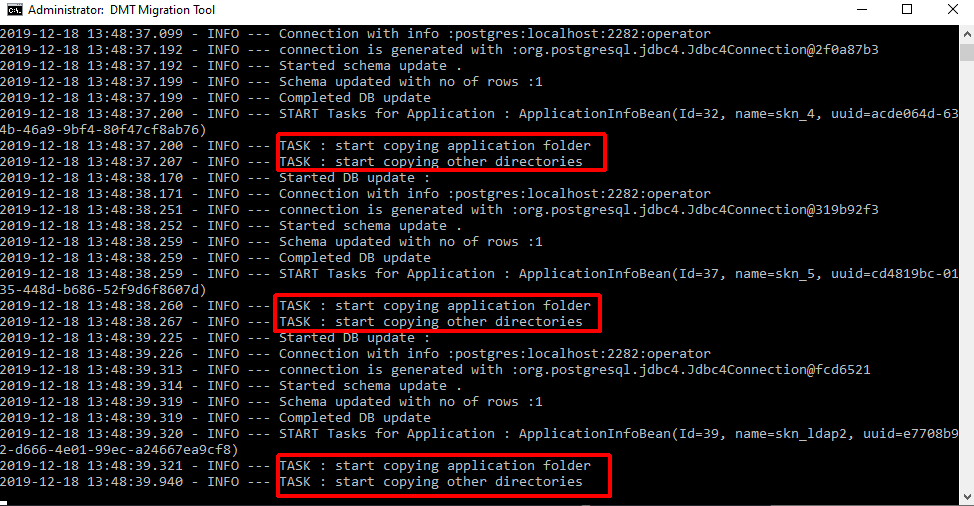 You will need to manually execute the split tool before installation of the new release of AIP Console in the following situations:

The manual migration process is as follows:

The split tool can be found in <AIPNode>/bin/dmt-migration-tool. Configure the config.json file with the correct settings: if you have multiple multiple CAST Storage Servers/PostgreSQL instances, you need to enter each one into this file (as shown below). Run the migration.bat file to complete the split. Then proceed with the upgrade.

This documentation applies to AIP Console users who are currently using a version < 1.13.x, have used Architecture Checker features, and have upgraded their version of AIP Console to 1.13.x or 1.14.x.

Below is described how folders containing Architecture files (models, templates, and library sets/layers) are organized before/after upgrade of AIP Console to 1.13.x, and what are the actions that will be automatically performed by the "upgrade process" during switch from the old to the new organisation of these folders.

All AIP Console Architecture Checker related files are located only on AIP Nodes, and files of a given Node are only visible to the end-user in the context of the Applications that are hosted by that Node. Below are, per AIP Node, the folders for the various files according to their type:

A model that used to exist on a AIP Node in version <= 1.12 will stay there, initially in the same folder as before (namely AipNode\data\upload\AC\models), because still the full file path of the model remains stored in the CAST-MS configuration of the Application(s) to which this model has been attached thus this path should not change. Note: as of AIP Console 1.13, models that will become attached to Application(s) will be in folder AipNode\data\drive_upload\architecture\models, instead of in AipNode\data\upload\AC\models.

Below are, on the AIP Console, the folders for the various files according to their type:

Why and when of the migration process

Since all Architecture models, templates, and library sets/layers are now centralized on the AIP Console instead of being spread across AIP Nodes, it is necessary to also bring in all the corresponding files from the Node(s) which used to host them up until now. The Architecture Models and user-defined templates whose transfer was successful will then be presented on the Architecture Studio main page, whereas the user-defined library sets/layers whose transfer was successful will be presented in a drop-down list in the models/templates editor.

The movement of Architecture files will not happen during the upgrade of the AIP Console version by the Installer tool, but rather each time an AIP Node will become available (i.e. accessible and enabled) when:

Neither Architecture standard/product templates nor standard/product library sets/layers files are affected by this move of files, because even though their folders will also have their paths changed, new versions of these files will be installed in new folders (both located under AipConsole\data\standard\architecture) on the AIP Console during execution of the Installer tool.

If no message is visible at all, it means that no migration was necessary: either the AIP Node did not host any Architecture Checker file, or else they have all been already migrated.

Once AIP Console has started, or a formerly disabled AIP Node has become enabled again, it is necessary to wait around 30 seconds to be absolutely certain sure that synchronization of the AIP Node will have occurred since the migration of Architecture files which is a part of it. Otherwise, launching AIP Console services, logging in, and then rushing to the Architecture Studio home page will almost certainly display none of the models and templates expected to have been migrated.

The migration process is the same whichever type of Architecture file is being migrated, and every message will indicate the file type for clarity. Below are the situations and the corresponding messages and severity levels, taking the example of an Architecture model file:

After all Architecture files found on the AIP Node currently of interest will have been processed, one line per type of file will be logged regarding migration success or failure. Below is an example showing the only two sorts of messages that can occur:

Compound names with an underscore are used because this migration log is generally not intended to be presented to regular users.

The migration process has been designed so that any AIP Node knows which of its Architecture files haven't yet been migrated. If the migration process is abruptly interrupted, then files that couldn't yet be migrated will be attempted to be processed again once their AIP Node will have been restarted or has become available again. However, in no case any Architecture model file that hasn't successfully been migrated will be deleted on the file system of its AIP Node whether it is, in the case of models, attached to any Application, or to none.

If some Architecture files have definitively become unavailable for migration (because for example they have been deleted on the file system of their AIP Node), warnings will endlessly be logged in the migration report, each time the migration process will be re-executed, until this process will have disappeared from AIP Console.

As part of the upgrade process, Architecture Model files will be automatically moved from storage on AIP Nodes to storage on the AIP Console (see note above). Since it is possible for Architecture Models on different AIP Nodes to use identical Metric IDs, after the upgrade and when one of the Architecture Model is subsequently edited in AIP Console a warning message will be displayed when model is saved as shown below. The Metric ID field will be editable so that a new metric ID can be assigned to the model. The model cannot be saved until the duplicate metric ID issue is resolved.

Note that to use dashboards embedded in AIP Console ≥ 1.12.x, CAST AIP ≥ 8.3.16 is required due to some structural changes introduced into the Analysis and Dashboard schemas. If you are not using embedded dashboards, then this constraint does not apply, however, CAST does recommend that you use the latest available releases where possible.

How to report issues and feedback

Please report and issue or feedback to the product manager, Damien Charlemagne (d.charlemagne@castsoftware.com).